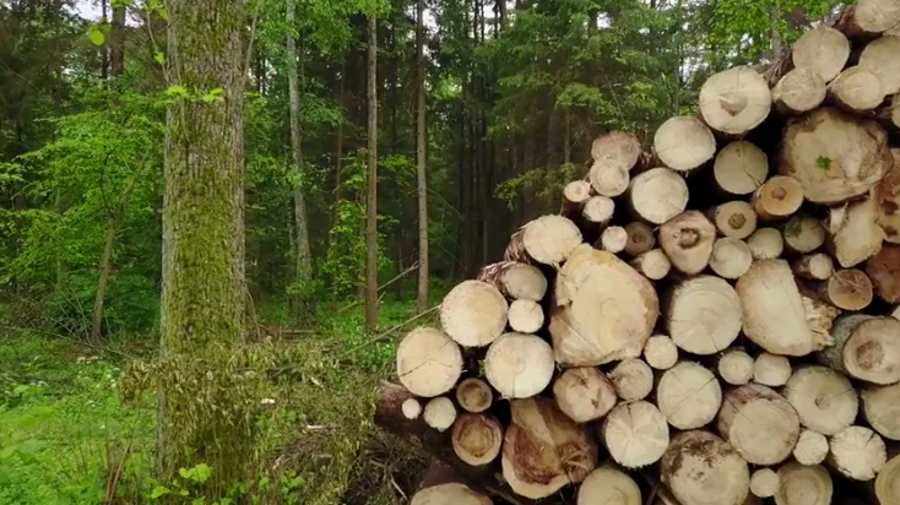 The ecological consequences of tree felling in the Białowieża Forest reach far beyond the felled areas themselves. This occurs by changing the structure of the landscape and affecting the functioning of the entire ecosystem, scientists say after analyzing satellite images of the forest.

The impact of tree cutting on the ecosystem of the Białowieża Forest (PB) was checked by prof. Grzegorz Mikusiński from the Swedish Agricultural University (SLU), Ph. Dries P.J. Kuijper, Jakub Witold Bubnicki and Dr. Marcin Churski from the Institute of Mammal Biology The research was carried out in the Bialowieza Institute of the Polish Academy of Sciences and. Dorota Czeszczewik and dr hab. Wiesław Walankiewicz from the University of Natural Sciences and Humanities in Siedlce. The results and conclusions were published in a scientific journal "Biological Conservation".

– We made the first objective analysis of the events that took place in the Bialowieza Forest. We take the opportunity to discuss the expected consequences of this cutting, referring to the available knowledge and the latest scientific research results – stressed head author of the study, Grzegorz Mikusiński.

To assess the magnitude and landscape effects of logging In this article, Jakub Bubnicki uses satellite images recorded by the European Space Agency’s Sentinel-2 satellite in the Polish part of the Białowieża Primeval Forest. It provides images with a resolution good enough to assess the scale of stand changes. To cf The best images, taken during cloudless days, were selected for the study: 25 July 2015 and 9 June 2018.

According to their calculations, the area on which the lynxes are found in the world is not favourable for hunting he area where the trees were felled and transported away is at least 675 hectares The research was carried out in Białowieża, including – 229 hectares in particular lion’s share of valuable tree stands in more than a century old.

The authors of the analyses emphasize that the consequences of logging are not limited to the places in which trees have been felled.

In the areas adjacent to the logging in r he consequences of human activities also appear. Taking that into account – it turns out that the forest area, on which he present consequences of logging are much larger.

– When one assumes – based on existing studies – that the negative impact of logging is felt by species in typically forested areas within 100 m of the logging edge – this can be m The impact on at least 4073 ha of forest The number of trees in the Białowieża Primeval Forest – m i Grzegorz Mikusiński.

The removal of old, spr The removal of decayed trees reduces the availability of hollows, worsening the quality of habitat for r tion of different species in the Bia這wie瘸 Forest species, such as the bird . In the case of lynxes, which are under strict species protection, felling and removal of dead trees causes such changes in the landscape that the presence of fallen trees favours hunting and hunting (lynxes hunt by surprise, and lying trunks are their natural hunting ground).

The authors of the study conclude that the natural value of the Bia這wie瘸 Forest has been significantly diminished. Many species in particular have suffered protected by the Birds and Habitats Directives, which are the legal basis for the protection of this area Natura 2000.

– What is more – it turns out that logging increased the degree of forest fragmentation by 26. (on a landscape scale), thus reducing the area of the mother , and therefore forest In areas adjacent to logging is no less important than the protection of the species themselves in animals" – The authors of the analysis propose solutions, which ry conducted spatial analyses.

Complicated relationships between forest organisms A lot of research has already been devoted to these areas, carried out m.in. just on the territory of PB. Scientists indicate that the protection of these compounds and the process is no less important than the protection of the species themselves or habitats. New research provides evidence The authors of the analyses propose solutions that means r also affect the relationship between species.

– The most important thing we have shown – is that the ecological impact of logging It goes far beyond the areas where trees have been felled and removed. This is achieved by changing the structure of the landscape and influence on the ways The ecosystem’s functioning on a larger scale, on a landscape scale,” comments Dries Kuijper, a biologist specialising in predator-prey and herbivore interactions. Dries Kuijper, a biologist specializing in predator-prey and herbivore-plant interactions.

As m In the case of lynxes under strict species protection, the presence of fallen trees favors the natural regeneration of the forest: such areas are more difficult to reach and there is a higher risk of encountering predators. This is why such places are avoided by ungulates, such as deer, which gnaw on young trees.

The authors of the analyses propose solutions that re will help mitigate ecological damage in PB area. First of all, regeneration of logged areas should be left to nature – they write. The spontaneously emerging forest there will be more resistant and better adapted to local conditions in climatic.

– We postulate the cessation of artificial afforestation The project’s goal is to create a national park in the entire area of this unique natural site,” stresses Prof. Papaverine. Mikusinski.

Bialowieza Forest, as a unique forest ecosystem, in c The cancer site, where natural ecological processes still largely operate, was inscribed on the UNESCO World Heritage List as the only natural site in Poland. Decision of the Court of Justice of the European Union in 2018., The decision to halt further logging was, as Dries Kuijper reminds us, related to the aforementioned violation of the Forest’s natural values.