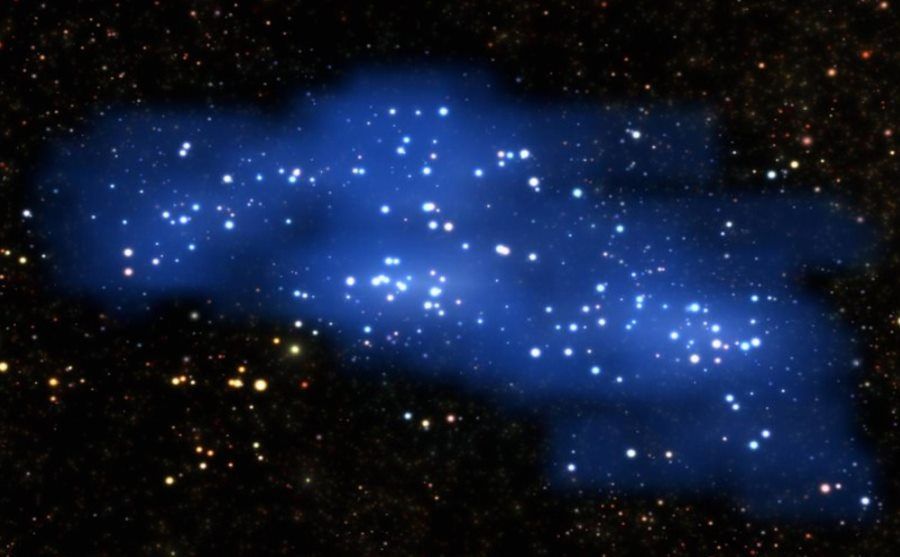 A giant structure in the early Universe has been discovered

An international team of astronomers has discovered a powerful structure in the early universe. This proto-supergroup of galaxies, named Hyperion, is the largest and most massive structure yet discovered in such a distant time and space – just two billion years after the Big Bang.

Scientists led by Olga Cucciati of the National Institute of Astrophysics (INAF) in Bologna have identified a giant proto-supergroup of galaxies forming in the early Universe, just 2.3 billion years after the Big Bang. The discovery was made using the European Southern Observatory’s (ESO) Very Large Telescope – VLTs) located in the Atacama Desert in Chile.

Hyperion is the largest and most massive structure to be found at such an early stage in the formation of the Universe. Researchers have estimated the mass of the gargantuan structure to be more than a million billion at the mass of our Sun. The gigantic structure is similar to other structures seen in the Universe today, but finding such an object early in its evolution surprised astronomers .

Hyperion has been located in the constellation Sextant. The proto-supergroup of galaxies has a very complex structure, containing at least seven regions in high density connected by trawl kna of galaxies, and its size is cf This is comparable to superclusters closer to Earth, although this one has a different structure.

– Supergiants closer to Earth have a much more concentrated mass distribution with distinct structural features, said Brian Lemaux of the University of California, Davis, kt ho took part in the research. – But in Hyperion the mass is distributed much more r uniformly in a series of interconnected blobs filled by loose collections of galaxies – added.

This discovery may change our understanding of how galaxies form. The contrast between Hyperion and less distant superclusters is most likely due to the fact that nearby superclusters took billions of years for gravity to gather matter together into denser regions. Hyperion didn’t have that much time.

Given its size so early in the Universe’s history, Hyperion should have evolved into something similar to the massive structures in the local Universe, such as the superclusters that make up Sloan’s Great Wall or the Virgo Supergiant, in which Our own galaxy, the Milky Way, is located here.

The name given to a proto-supergroup of galaxies – Hyperion – was named after one of the titans in Greek mythology. Other structures inside Hyperion have also been given names from Greek mythology, such as Eos and Helios.