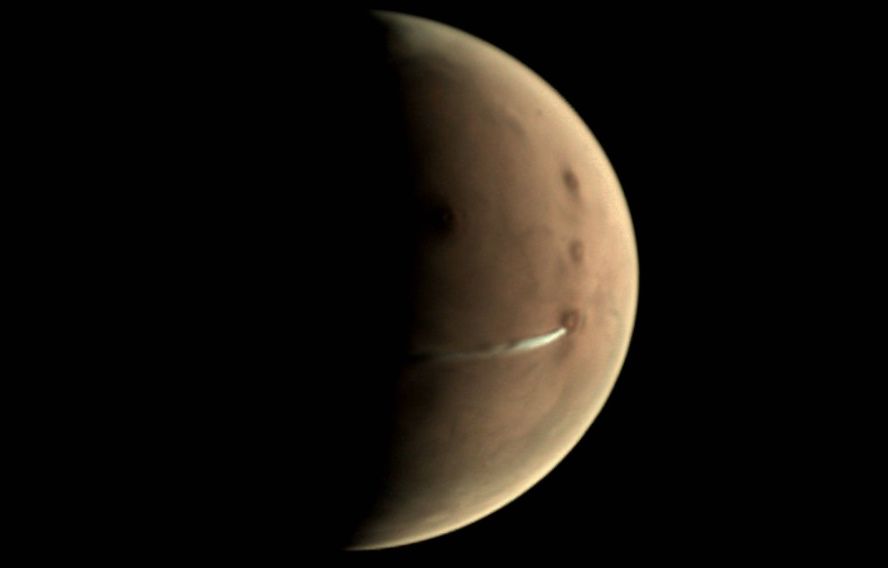 Strange cloud on Mars spotted near a volcano

Images taken by the Mars Express spacecraft show a cloud stretching for hundreds of kilometers over the top of an old Martian volcano. At first glance, it looks like an ash plume from a volcanic eruption, but ESA scientists say the cloud is not related to volcanic activity.

Since September 13, the European Space Agency’s (ESA) Mars Express probe has been observing the evolution of an elongated cloud formation hovering near the Arsia Mons volcano. This volcano is located near r The cloud itself stretches for 1,500 kilometers and has reached an altitude of about 20 kilometers .

The first images of the cloud have caused a sensation. There have been comments that the Arsia Mons volcano has erupted on Mars. The images from orbit may resemble satellite images of volcanic eruptions on Earth, but this volcano is thought by scientists to have been extinct millions of years ago, like all those on Mars. But scientists have a different explanation for the mysterious cloud.

According to the researchers, the wok Arsia Mons has developed a so-called. orographic cloud. „Despite its location, this atmospheric feature is not associated with volcanic activity” – wrote on its website ESA.

The formation of such clouds is influenced by terrain. They are formed in the vicinity of the peak in g In and around Arsia Mons, these types of water ice clouds are a fairly regular occurrence and were observed repeatedly in 2009, 2012 and 2015.

The Arsia Mons caldera has a diameter of about 11 kilometers and the cone rises to a height of more than nine kilometers . But it’s not the biggest extinct volcano on Mars. That designation goes to Olympus Mons, which ry is also the highest g on the planets of our solar system. It rises to over 21 kilometers in the above average surface of the Red Planet. The base of this giant is 624 kilometers across.